In partnership with Kooperativa and Operation city, SKC Center Jadro from Skopje presents the group exhibition by contemporary Macedonian artists and the presentation of the book "In Dialogue".

Today artists are facing serious challenges in defending the common space, the very essence of the concept of the public, and necessary conditions for the realisation of the basic idea of democracy.

The autonomy of the contemporary artist is always socially conditioned, and the artists are struggling to overcome the position of marginalisation and powerlessness in the public sphere, where political and economic power intersect.

We are more than ever aware that politics is inherent to the field of art, and artists are like all the other citizens - political beings. In today’s societies in which there is a deep divisions in terms of ethnicity, religious beliefs, partisanship, in a situation where extreme nationalism is always present and can easily be set on the rise, forms of populist and xenophobic authoritarianism could come as no surprise.

Contemporary Macedonian culture faces the standard problems of all the other small countries, as the Macedonian contemporary art scene as a whole is characterised by discontinuities in a more substantial institutional support especially in promoting Macedonian artists abroad. There have been many separate attempts for a presence on the international stage, but this is mainly due to the ambitions, efforts and enthusiasm of each artist individually.

With every new exhibition, and every new publication, any visual content or written word, the artists are contributing a small but important step in the process of avoiding the fall into nothingness and oblivion that are a constant threat.

That’s why the crucial issues to be addressed and questioned are the distribution of power, freedom of speech, media manipulation, the (mis)use of public space or the de/centralization of cultural networks. The artist can set themselves to recognize the manipulations concealed behind these strategies and is capable of exposing the workings of such mechanisms.

Given that we still operate under the paradigm in which the position of the artist is considered as paradigmatic of resistance, the artists both individually, but also through different forms of collaboration, are trying to question the dominant discourses that define identity, territories and borders, migration policies and homelessness, as well as the xenophobia and hate speech deeply rooted in every society. One of the key questions is how can art actually participate in society and become an effective instrument of change? Could it propose values through the institutional cultural infrastructure, and make a difference?
The fight continues...

Motivated by the fact that the local scene constantly faces a lack of continuity in structured analysis and historiography of the work of our visual artists and designers, in 2020 the authors of the book "In dialogue" started a series of conversations and presentations Macedonian Visual Artists, Macedonian Designers and Video Artists from Macedonia and the region.

It was particularly important to them to encourage the authors to talk about their work, the creative and technical process as well as the circumstances in which they create. Many of their visual artists are very prolific and in difficult circumstances manage to exhibit their work at relevant exhibitions in the country, in Europe and around the world. Unfortunately, because they are frequently systemically neglected by the institutions and media, their pieces and successes are not adequately presented to the wider audience. Macedonian video artists have been active in this medium since early 1990s. By establishing a link with video artists from the region we want to contribute to the promotion of our artists on the international stage. Furthermore, the authors want to open the issue about the position of video art today, as well as its numerous transformations and experiments and how it interweaves with other art forms. Macedonian design was seriously successful in the last several years. The designers were able to affirm their work in the country and abroad. Their designs have won prizes at various festivals and competitions and have been featured in relevant magazines and web platforms in the world. Typography, design of books, logos, posters, campaigns, video game design and development are some of the areas where they successfully bring their creative ideas to life.

This project is based on the attempt to alter/give new meaning to predominantly nationalist and ethnically biased graffiti on city walls. The project consists of finding ways of adding to or altering existing graffiti within public spaces. This action is an attempt to introduce an element of ‘healing’ the cities from this continued negative presence and aggression. The action was performed in Skopje, Rijeka and London and it is ongoing.

Nada Prlja (1971) is a visual artist, born in Sarajevo. She moved to Skopje in 1981. She now lives and works between Copenhagen – Skopje – London. She graduated at the Faculty of Fine Art in Skopje (1997) and obtained a Master of Philosophy of Art research degree at the Royal College of Art (London, 2002). She has realized several solo exhibitions and participated in numerous international exhibitions. In 2019, Prlja was the Macedonian representative at the 58th Venice Biennale, with her project Subversion to Red. She has participated in nine international Biennales: 14th Baltic Biennale (2021); 5th Innsbruck Biennale (2020); 5th Moscow Biennale (2013) (film program); 7th Berlin Biennale (2012); Manifesta 8 (2010), etc. Nada Prlja, through her artworks, deals with the complex situations of inequality and injustice in societies. Her main goal is to most directly affect society: she challenges the critical discourse about current politics, nationalism, the transition of former socialistic countries, human rights, migration and ecological issues.

2021, ongoing, a series of digitally printed publications on paper, tied together with a needle and a thread, by hand or sewing machine; each 10.5 x 14.8 cm

Collaborators for the 4th and the 5th issue are Ivana Spiroska and Simona Mancheva. The 7th issue was produced in Dubrovnik, supported by Culture Hub Croatia. The participants in the 8th issue are Anđelko Glavinić, Tonči Kranjčević Batalić, Marina Plosnić, Matea Zekan and Petra Davidenko, and it was produced in Split, in partnership with the queerANarchive collective.

Darko Aleksovski (1989) is a visual artist whose practice is formed on the intersection between images and writings. His projects include interest in different visual languages and ongoing research processes, as well as an interest in the relations between personal and collective memories.

Slavica Janeshlieva: Monument Dedicated to the End of The 20th and Beginning of 21st Century (with two unintentional human errors)

Monument Dedicated to the End of The 20th and Beginning of 21st Century (with two unintentional human errors) refers to the tent as a symbol of the period we live in, because it definitely seems to have become a symbol of anti-civilisation, not only of the nomadic way of life but also of any kind of expression of dissatisfaction and protest. I live close to the government, and setting up tents and protesting with tents is very familiar and close to me, but in the period when I was thinking about this work, wherever I travelled, I was somehow followed by tents. In front of governments, in front of assemblies... as a way of expressing anger. At the same time, that period, the year of 2016, was the beginning of the Syrian crisis and the refugee crisis with the migrants was very common. Thus, the text written on the tent actually deals with these two principles, with the tent as a symbol for those who have been displaced, and the text actually contains the golden letters that form the two words: no home, while the text at the bottom, through the words about people who demonstrate, form the words: human rights

Slavica Janeshlieva (1973) is a visual artist who lives and works in Skopje. She has graduated from the Faculty of Fine Arts in Skopje, the Graphics Department, under professor Zoran Jakimovski in 1996, and she has completed her post-graduate studies in the field of graphics at the same faculty under the mentorship of professor Dimitar Malidanov, in 1998.

Although by education she is a graphic artist, she is an author with a strong multimedia and intermedia approach, with a recognizable expression and exceptional gift for visual narration in different media: graphics, objects, art installation, drawings, photography, video, art book, etc. Her works have been exhibited at juried and curated national and international art exhibitions around the world (30 solo exhibitions and around 300 group exhibitions).

She is the recipient of various international and national prizes and awards, and some of her works are part of important collections in the country and abroad. She has participated in artist-in-residence programs and organized professional and student seminars and workshops, international lectures and curated exhibitions. She has been teaching at the Graphics Department with the Faculty of Fine Arts at the University of Ss. Cyril and Methodius since 2006. In 2018 she completed her doctoral studies at the Blazhe Koneski Faculty of Philology, Department of Comparative Studies, under the mentorship of professor Vladimir Martinovski.

Gjorgje Jovanovik: There is no money for which I will not work

The performance There is no money for which I will not work is an attempt to think about the precarious conditions and circumstances in which the cultural workers work. Instability of employment, the parallel working on different jobs or projects, or the problems of lacking trade union or other professional association that will articulate their problems and position in society are the bitter problems that cultural workers in Macedonia and abroad are facing.

For his practice, he has been awarded with the award for young visual artist “Denes” in 2009, the award for video at the international festival Alternative Film/Video in Belgrade in 2009 and the award of the 10 Biennial of Young Artist organized by the Museum of Contemporary Art in Skopje in 2013. 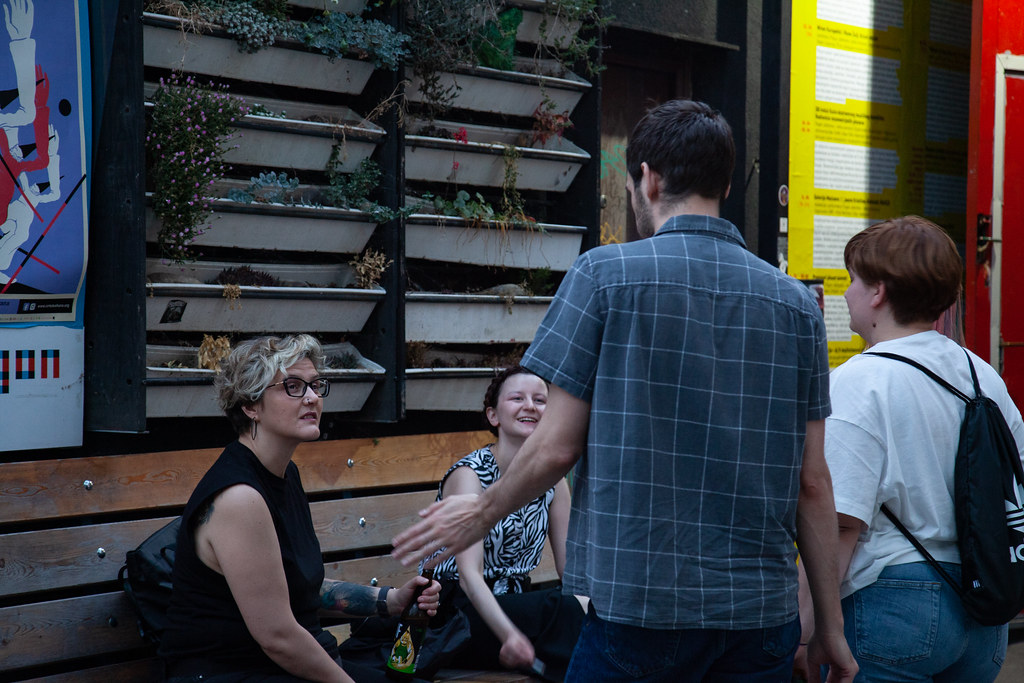